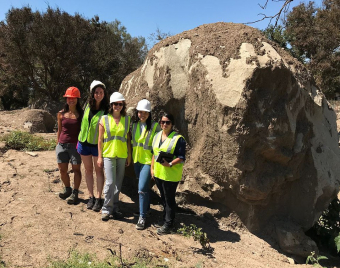 The next disaster is on many minds as winter approaches, bringing with it the promise, or threat, of more rain. To both better prepare and also understand the Montecito debris flow preparations, everyone living in the 93108 is being asked to fill out a survey designed by UCSB scientists to understand public reaction to emergencies. Physical scientists are teaming up with social scientists at the school — or the Montecito debris flow research team — to mail postcards that ask recipients to go online to fill out the survey. Survey responses will help add clarity to the information scientist already have on this disaster and will aid in preparations for future emergencies.

“We ask about experiences during the debris flow, risk perceptions, and disaster preparedness behaviors,” said Sarah Anderson, a Bren school associate professor of environmental politics, who is involved in the survey. The questions also ask about “Environmental policy and behaviors,” she added, “preferences for education about debris flows and other disasters in Montecito schools, and, of course, some questions about the person taking the survey.”

How Montecitans think about disaster and the prep required, or postponed, amid hectic times is being compared to other places subject to the same risks. One such place is the community of Montrose, which lies at the foot of the San Gabriel Mountains. Similar to the Santa Ynez Mountains in steepness, the San Gabriels sent terrible debris flows down slope in 1987 and also in 1934. Both events — the more recent one memorialized by John McPhee in a set of New Yorker pieces titled “Los Angeles Against the Mountains” — have likely receded in memory as had the 1969 floods and debris flows in Montecito by the time the January 2018 storms hit. Anderson intends to do surveys in Montrose to get a perspective on how the experiences in one place can help others prepare.

The postcards will drop into the mail soon and online survey replies are requested by October 25. The team will also send paper surveys in the next week to residents, who have the option of participating in an in-depth interview with Summer Gray, a UCSB assistant professor in Environmental Studies. The final report should come out by January, said Anderson, though they are trying to have the information assembled by December.