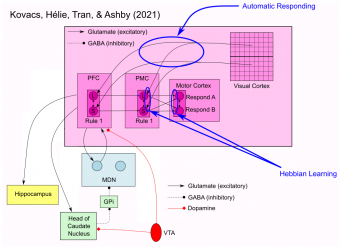 Ashby, Ennis, and Spiering (2007, Psychological Review) proposed that skills learned procedurally are mediated entirely within cortex after they are practiced enough to become automatic, and that the development of automaticity is associated with a gradual transfer of control from the striatum to cortical-cortical projections from the relevant sensory areas directly to the premotor areas that initiate the behavior. So the cortical-cortical projections from visual cortex to the supplementary motor area eventually mediate the expression of automatic behaviors without any assistance from the subcortical loops through the basal ganglia. Therefore, according to this account, a critical function of the basal ganglia is to train purely cortical representations of automatic behaviors. Kovacs, Helie, Tran, and Ashby (2021, Psychological Review) proposed a similar account of how rule-guided behaviors are automatized in which the prefrontal cortex trains the cortical circuits that implement the automatic behaviors.

In cortex, synaptic plasticity follows Hebbian learning rules, in which any active synapses are strengthened, regardless of whether the behavior that follows the activation receives positive or negative feedback. For this reason, purely cortical circuits are incapable of learning any behavior that requires trial-by-trial feedback. Ashby et al. (2007) proposed that the basal ganglia use DA-mediated reinforcement learning (i.e., at cortical-striatal synapses) to gradually activate the correct postsynaptic targets in premotor cortex, which thereby enables Hebbian plasticity at cortical-cortical synapses to learn the correct associations (i.e., because there will be more postsynaptic activation at the correct synapses than at synapses leading to incorrect responses). The Kovacs et al. (2021) model is similar, except a prefrontal-mediated rule discovery process activates the correct synapses in premotor cortex.

These models account for many results that are problematic for other theories of automaticity. For example, the Ashby et al. (2007) model correctly predicts that people with Parkinson's disease, who have DA reductions and striatal dysfunction, are impaired in initial procedural learning, but relatively normal in producing automatic skills. And the Kovacs et al. (2021) model correctly predicts that rule-sensitive neurons in premotor cortex will fire before prefrontal rule neurons when the behavior is automatic, even though these same premotor neurons fire after the prefrontal rule neuron during early learning.