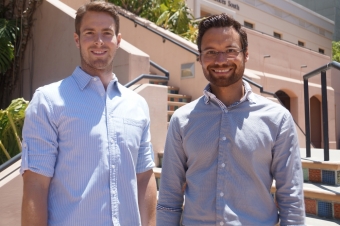 At the Junction of Science and Engineering

Science and engineering are like fraternal twins, separate and distinct but born of the same stuff. At the interface of these related disciplines new discoveries await.

This year’s recipients, Netz Arroyo and Scott Boyer, are engaged in projects with seemingly endless potential.

Working in Kevin Plaxco’s group in UCSB’s Department of Chemistry and Biochemistry, Arroyo, winner of the Williams fellowship, has redesigned an electrochemical sensor that measures conformational changes in biomolecules such as DNA, RNA and proteins when they react with target molecules present in blood samples. This has the potential to shed light on biological factors related to drug addiction.

Arroyo’s redesign incorporates a miniature membrane that eliminates interference from blood cells. “The sensors are working,” Arroyo said, “so the next step is to fully characterize the system to make sure it works every single time, then understand the pros and cons and from there go one step forward and begin experiments with animals.”

As the two-year project progresses, Arroyo will test these sensors in collaboration with the Tod Kippin’s lab in the Department of Psychological & Brain Sciences. The ultimate goal is to study pharmacokinetics — how the body processes and metabolizes a drug — by measuring the effects of drugs and neurotransmitters in the brain.

Tracking a drug should enable the researchers to measure the effects of the molecule in the cerebral environment. “If we can understand that and measure it quantitatively to a point where we know exactly what’s going on,” Arroyo explained, “then we can start addressing other questions about addiction and whether or not there is a predisposition to being an addict. We can ask chemical and behavioral questions: ‘How do changing drug levels drive changes in behavioral patterns?’ ‘What neurochemical relationships determine who becomes addicted and who does not?’ Starting to answer such questions is the dream goal of the project.”

At the Junction of Science and Engineering